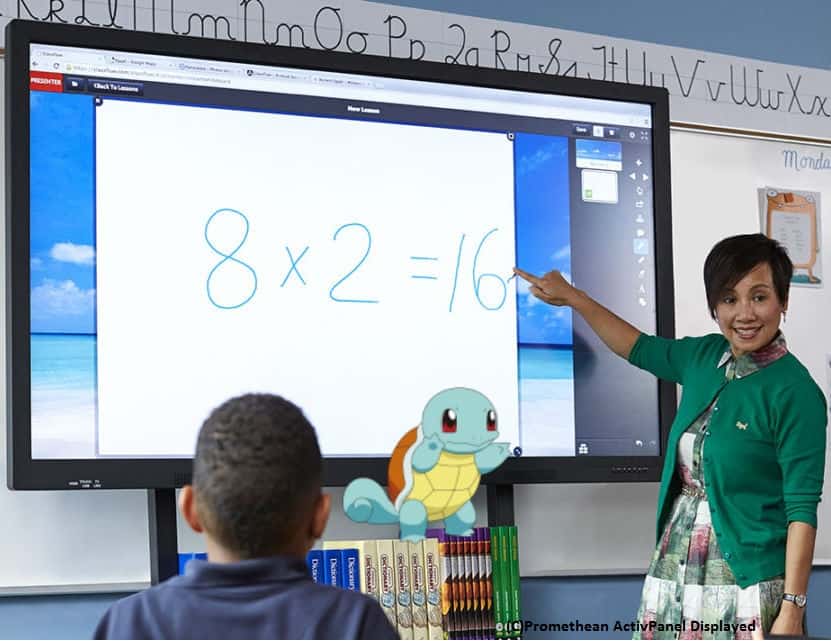 27 Jul Pokémon Go and Smart Boards in the Classroom?

Posted at 18:48h in Education by Luis Garcia 0 Comments
0 Likes

It has been years in the making from technology experts stating that augmented reality is the future. Augmented Reality or “AR” provides a superimposed computer-generated image on a user’s view of the real world.  A simpler version of this has been used by the military for decades.  For example, the Heads Up Display or HUD, that Fighter Jet pilots use has this type of overlay on top of what they can see in front of their aircrafts.  Certain types of cars have also been using HUD’s on the windshield in front of the driver’s field of view to show information such as the current speed, RPM, navigation directions, and speed limits.

After numerous attempts by major corporations with Virtual Reality headset integrations such as Google Glass, Microsoft HoloLens, and Oculus Rift, nothing seems to have hit main stream until recently.  SnapChat and most recently, Pokémon Go has been all the craze lately with AR and social interactions. But what does this have to do with Smart Boards & Pokémon you ask? Lets first start with the basics.

Smart Boards, Interactive White Boards, and even Student Response Systems, while not classified to use AR, have been providing a superimposed overlay in classrooms for years.  These systems have been the status quo for classroom technology where most teachers & students already have experience operating.  The older projector based systems used stylus pens for writing & input, while the newer Smart Board LCD Panel systems are touch based that can be interactive with your fingers. This interaction along with ease of use helps accelerate adoptions for fresh innovative technologies and programs to deliver material to students.

Pokémon Go has been taking the country by storm, kids, adults, parents, everyone is in on it.  I’ve seen couples playing it together walking through parks.  I’ve seen parents walking with their children playing it with them.  I’ve seen adults walking their dogs playing it solo.  It’s bringing several generations of people together that normally may have little in common to work together in a positive way.  It’s a fun interactive social game that gets everyone out of the house to explore and you get some exercise out of it too.  There’s several aspects of this game that can be beneficial in the education sector.

A big part of the game requires the players to visit key points of interest in your town.  These points of interest are called Pokéstops where you collect useful items you need to play the game.  Some of those Pokéstops includes parks, memorial’s, statue’s, & art pieces.  Teachers can assign lessons for students to write an essay of Pokéstops around the school or library.  For example, in our town next to the library is a park that has memorial sites for WWII, Vietnam, & 9/11.  The game also tracks distances walked in kilometers, which you can include in lesson’s to convert the km’s to miles.  You can also integrate math from the game with problems and conversions.  For example, what’s the health to strength ratio of all of the student’s captured Pokémon characters or the average Pokeball’s used within a given area.  The screen that shows all of your captured Pokémon is called the Pokédex.  The Pokédex shows a list of all of your captured characters which includes metrics such as height & weight.  The students can then take those metrics to model the characters on a computer which can be printed out on a 3D printer.

Autism expert Craig Smith reports from UK’s Independent website that a school was able to incorporate this game into their lessons to encourage autistic student’s social skills.  Meg Conlan from EdTech reports 3 ways Pokemon Go can create educational opportunities, she also includes Microsoft’s Minecraft Education Edition.  John Warner from Inside Higher Ed reports five reasons why this game will change Education. Education World reports from actual teachers and their input about the game including what benefits, if any, it poses in classrooms.  The TCEA posted in their blog a list of additional education opportunities for Pokémon Go. The teachers have stated they will be planning on incorporating this game into their lesson plans starting the upcoming school year.  This list can go on and on exhausting pages of resources.  Just google “Pokémon Go in Education” and you can see all of the results.

Smart Boards can harness this new game’s technology to allow sharpening of student’s skills as well as create awareness for their safety.  The lesson plans can allow the students to be interactive with the results on the Smart Board’s.  This includes performing math calculations, geography of the surrounding area, and the teachers can even get involved in possible area’s that the students should stay away from.  For example, the teacher can bring up a Google Map of the surrounding area within their town.  You can then create an assignment for the students to document all of the Pokéstop locations in their town.  Then you can create a Google Map Overlay of your area that can display the points of interest or Pokéstop locations.  This map can be interactive on a Smart Board or Interactive White Board as you’ll be able to record denotations of area’s that the students may not want to venture into.

The possibilities and educational opportunities are endless.  I’m sure as time goes on those in the educational sector will find new and creative ways to engage the students.  You can start by asking the students to raise their hands if they are playing the new Pokémon.  Then ask the ones that are playing why the game is so intriguing to them.  Perhaps those answers alone will stir your own curiosity and creative juices to reinvigorate learning in your classroom.  Don’t forget On-Site Technology is a certified Interactive White Board and 3D Printer dealer.  Ask us how we can help your school today!